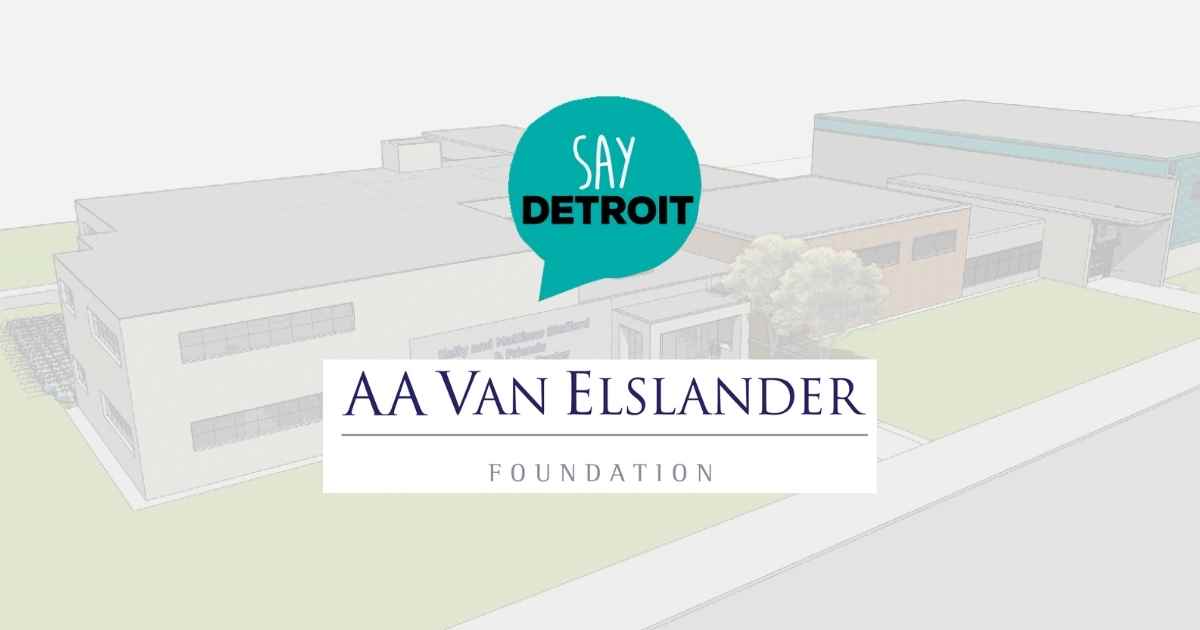 Dec. 9, 2021/Troy, MI. — SAY Detroit today announced the award of a $1 million grant from the A.A. Van Elslander Foundation. The grant enables the nonprofit to reach its fundraising goal to start construction of “The Kelly and Matthew Stafford & Friends Education Center’’ on the grounds of the SAY Play Center at Lipke Park in northeast Detroit.

The A.A. Van Elslander Foundation, which was endowed by the late Art Van Elslander, one of Michigan’s most prominent and respected businessmen and philanthropists, supports Michigan-based charities benefiting children, health and human services. The announcement was made today (Dec. 9) by Gary and David Van Elslander, two of the late philanthropist’s sons, during the 10th annual Mitch Albom SAY Detroit Radiothon at Somerset Collection in Troy.

“Art Van Elslander has always been a champion of important causes in the city of Detroit,’’ said Albom, who founded SAY Detroit in 2006. “The foundation’s most-timely gift to SAY Detroit continues that tradition and gets us across the finish line with a major development at the SAY Play Center that will benefit hundreds of children for years to come. We are extraordinarily grateful.’’

David Van Elslander said: “Our father respected Mitch’s unwavering commitment to helping others, and was a fan of Matthew Stafford. He was also born and raised in Detroit. We know he would be proud to support this project, and thrilled to know that a gift from his foundation is bringing it across the finish line.’’

In February 2021, NFL quarterback Matthew Stafford and his wife, Kelly, pledged $1 million to launch the nonprofit’s campaign to build a 20,000-square foot annex on the grounds of SAY Play, which will include additional classrooms, learning labs and an auditorium, allowing the nonprofit to expand its services to host a growing and diverse range of programming for Detroit children, teens and adults. The Staffords have supported SAY Play, an after-school youth academic and enrichment center, since the facility opened in 2015, when Matthew Stafford was quarterback of the Detroit Lions. SAY Play is located at 19320 Van Dyke, Detroit, 48234.

The new annex is scheduled to break ground in early 2022, with completion anticipated by the end of the year.

About the A.A. Van Elslander Foundation: The A.A. Van Elslander Foundation was established in 2016 by Mr. Art Van Elslander. As one of Michigan’s most respected businessmen and generous philanthropists, his commitment to helping others was a cornerstone of his life’s values, and defines our philanthropic agenda, providing support to Michigan-based charities benefiting children, health and human services. For more information: www.vanelslanderfoundation.org