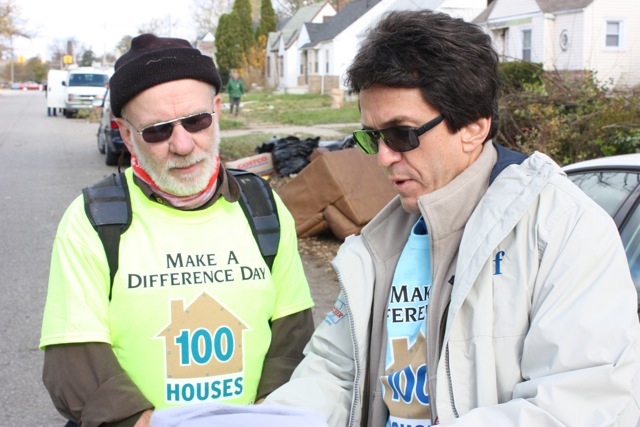 On August 10, 2013, the One Hundred Houses army will convene for a third time. This year, Mitch Albom and the Detroit Rescue Mission Ministries will be collaborating with residential builder Bill Pulte and his organization, the Detroit Blight Authority. Together the organizations will beautify over 500 vacant lots in the city’s Brightmoor neighborhood. The project is part of Pulte’s five-step plan to take a “bite out of blight” and will be one of the many efforts to remove blight in the area.  In early June, Pulte and the DBA began removing blighted structures, debris, trash and brush. Over two hundred volunteers will be divided into teams of 30 to help seed the lots, which span 14 city blocks, with wildflowers.

A group born of the cooperation of the Detroit Rescue Mission Ministries, Mitch Albom’s SAY Detroit and A Time to Help, Detroit Media Partnership, and Mayor Dave Bing, 100 Houses launched an inaugural project on August 25, where hundreds of volunteers in 55 teams boarded up 105 homes within a one-mile radius of Osborn High School. In its second iteration on October 27 on “Make a Difference Day,”  hundreds of volunteers gathered to safely board up 186 of the most blighted and dangerous homes in the vicinity of Cody College Preparatory Upper School of Teaching and Learning.

“We’re trying to put forth a model for the rest of the City in terms of how blight elimination should be done,” said Pulte in an interview with the Detroit Free Press. “It makes sense to do it in a concentrated, effective manner. Focus in on an area, leverage the cost savings of doing it in a specific area and find areas that can benefit from it … if we’re able to scale this model across the rest of the city, it will change Detroit’s landscape as we know – financially and safety-wise.”

“Bill’s project is very similar to what we began with the 100 Houses project last year,” said Albom. “By working together and encouraging people from all over to come out and volunteer their time to help rejuvenate Detroit neighborhoods, the community will be greatly impacted and we will begin to see real results. We’re very excited to help in every way we can.”

One Hundred Houses: Taking a Bite Out of Blight

Project:  Volunteers will remove and eliminate blight over 500 vacant lots in Detroit’s Brightmoor neighborhood by helping to seed the lots, which span 14 city blocks, with wildflowers. Volunteers will be divided into teams of 30.

Extras: Starbucks will be providing free coffee during morning registration, and the first 150 volunteers to check-in will receive a free Blight Elimination t-shirt. The event will conclude at noon with a free lunch provided by the Blight Authority.

Where: Please check in at Outer Drive Burgess Park, between Burgess and Chapel Streets| | Detroit, MI 48223