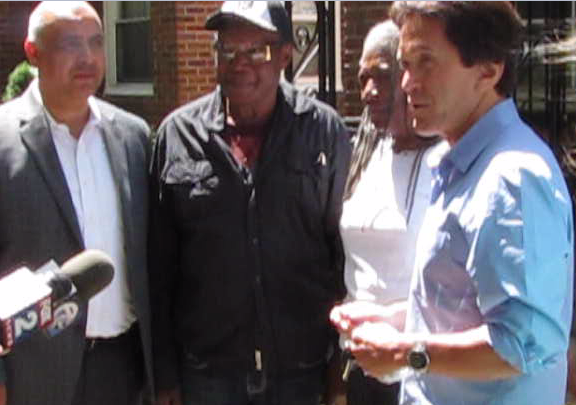 Siblings Margaret Glover Terry, 72, and John Glover, 66, were given more by S.A.Y. Detroit than a home in the stable Warrendale neighborhood Thursday afternoon; the keys to their new furnished home brought a hope they hadn’t felt in years.

Their previous home on 25th street, which had rotting floors, a leaky roof, and no running water since October, was a dire reminder of the hard times they’d fallen upon. The home they shared as children with five other siblings–all now deceased—it was here that Margaret taught internationally renowned recording artist Stevie Wonder to play the piano.

With Margaret as his musical guide, Stevie partnered up with her brother John, and the talented twosome, as “Steve and John,” were eventually signed to Motown Records in the mid-60s. However, when his contract was not renewed, John was forced to walk away from making music. Eventually he gravitated toward songwriting in the 1970’s and found success writing songs for big names like the Jackson 5, the Supremes, and creating a number one hit in 1976 with “You Don’t Have to be a Star (To Be in My Show)” for Marilyn McCoo and Billy Davis Jr. Financial mismanagement and vague royalty reporting meant little financial reward for the prolific song writer. More on the siblings’ musical legacy in Albom’s Free Press profile here.

For Albom and S.A.Y. Detroit, taking action to help seniors find appropriate housing is both obvious and necessary. As abandoned neighborhoods and lack of adequate housing have been a major problem for Detroit seniors, Albom believes “senior citizens…ought to at least live out their older years in a decent place.”[1] Margaret and John are just one example of the life changing work S.A.Y. Detroit and Detroit Rescue Mission (DRMM), its operational partner, are taking in order to help seniors and families in need. Humble Design, a Pontiac-based charity, furnished the entire house.

The old house on 25th street was once part of an active residential area with more than 94 homes; today, there are just a few homes left. Abandoned neighborhoods are unkempt and unsafe—Margaret and John were robbed five times in the dim-ly lit, decaying street. Providing homes for seniors and working families, who pay all the taxes and utilities, is a crucial step in rebuilding abandoned neighborhoods into thriving communities. S.A.Y. Detroit, in partnership with DRMM and Working Homes/Working Families has given more than 17 homes to families in need of decent housing in the last three years.

For Margaret and John, it’s the chance to write a new verse. The old piano where Stevie learned to play, a piece of musical history, is now safely tucked away in their new home.

Photos from the turnover ceremony: