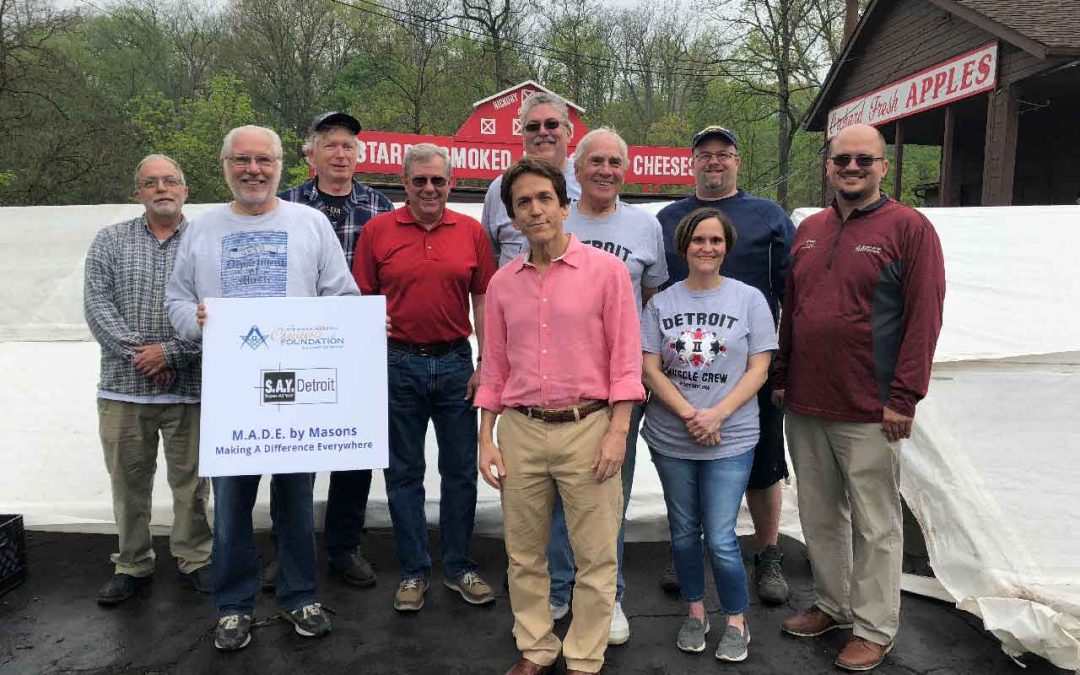 Starting Tuesday, the DWIF’s gourmet Brown Bag Popcorn will be sold at Plum Market stores in West Bloomfield and Ann Arbor, and at Detroit Metropolitan Airport.

And on Friday, the DWIF opens its seasonal pop-up shop for the second year in a row at the picturesque Franklin Cider Mill.

That’s where nearly a dozen members and supporters of the Michigan Masonic Charitable Foundation were on Monday, dodging rain drops as they constructed the 40-foot long tent that will soon welcome thousands of customers who’ll order the popular frozen dessert this summer.

The Michigan Masons are one of S.A.Y. Detroit’s strongest supporters – and the partnership is more than financial. For the second time in two years, the foundation provided volunteers for a major project to benefit the DWIF, where all proceeds from the sale of its products benefits the programs and projects of S.A.Y. Detroit.

In January 2017, nearly 40 Masons worked cleaning, clearing and organizing the store and storage unit at the DWIF’s Campus Martius location. On Monday, it took the Masons just under two hours to “raise the tent’’ that will become the home base for the store’s seasonal location on the corner of 14 Mile and Franklin Road in Bloomfield Township.

S.A.Y. Detroit founder Mitch Albom was so grateful for the Masons’ help that he considered them to be honorary Detroit Muscle Crew II members for a day. The DMC II is a group of skilled tradespeople who volunteer their time and service to help S.A.Y. Detroit with its various physical projects.

“We’ve got about a dozen volunteers representing eight lodges here, and we’re thrilled to be able to help out S.A.Y. Detroit in any way we can and strengthen our partnership,” said Darren Thompson, communications director for the Grand Lodge of Michigan. “The project went well. The hardest part was trying to get through the asphalt to anchor some screws, but many hands made light work and we had good direction from S.A.Y. Detroit and Larry here from the cider mill to let us know how it’s suppose to look. It’s been a great day.”