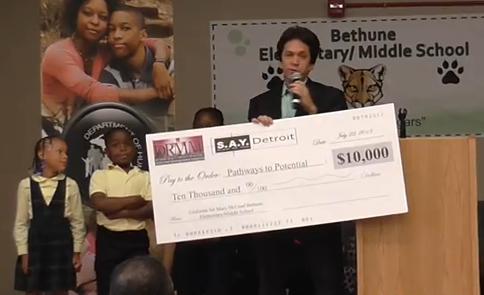 On Monday, July 22, 2013, Bethune Elementary and Middle School received a $10,000 donation from Detroit Rescue Mission Ministries (DRMM) and its partner, S.A.Y. Detroit. The purpose of the donation was to ensure that Bethune’s 840 students had a new school uniform to wear for the 2013-2014 school year. Bethune adopted uniforms the year before to encourage discipline and increase attendance. Unfortunately, the switch had the opposite effect: many of the children could not afford to buy them, and attendance dropped dramatically. The donation was announced at an all-school assembly later that day. “It’s through the generosity of our donors that we are able to…provide school uniforms for these children,” said Dr. Chad Audi, President of DRMM.