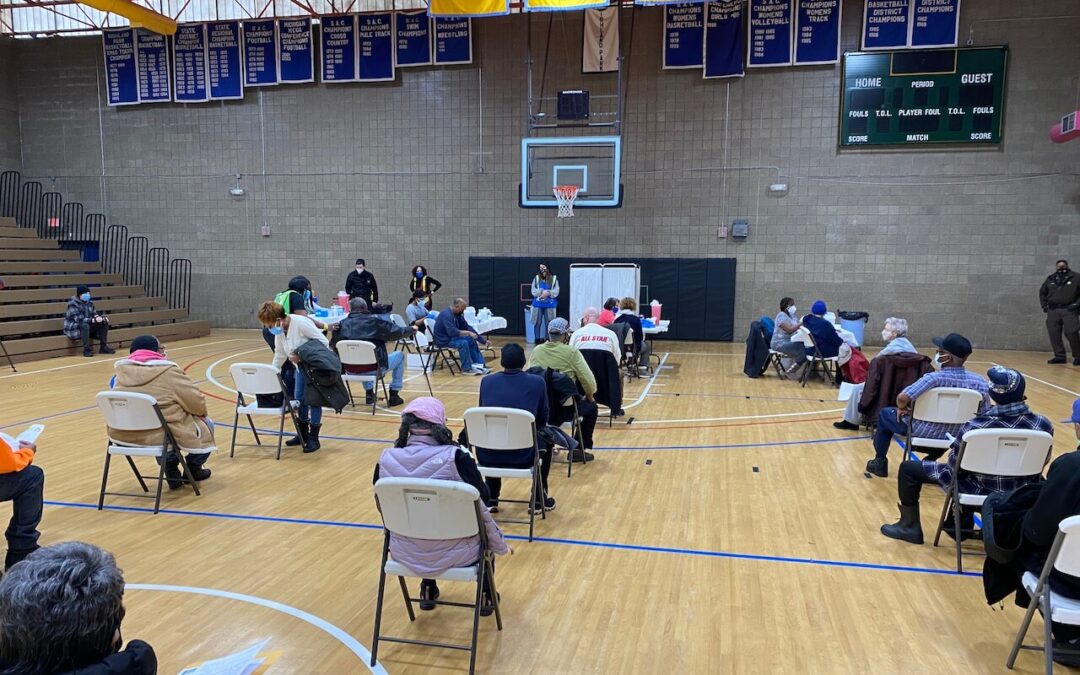 A second-dose vaccine clinic is underway today at the Ernest T. Ford Field House in Highland Park for seniors 65+, first responders, and residents with underlying conditions, following up on over 600 first-time doses that were distributed on February 23rd and 24th. The effort is a collaboration between the Wayne County Department of Public Health, the City of Highland Park and the office of Mayor Hubert Yopp, and SAY Detroit to increase access to the vaccine for an area and population that previously did not have it.

Spots filled quickly when first announced, necessitating a move from the SAY Detroit Family Health Clinic to the much larger field house. The response demonstrated the need and demand for vaccine access for the independent city in Wayne County, even as early data showed Blacks are 75 percent less likely than other racial groups to say they will definitely or probably take the COVID-19 vaccine. This mix of hope and well-earned skepticism was evident in patients during the vaccine clinics.

Roy Gill of Highland Park undergoes dialysis three days a week. But for some reason, despite his health condition, he still felt uneasy about getting his first dose of the COVID-19 vaccine.

“To tell you the truth, I wasn’t going to take it,” said Gill, 55. “I thought it was going to be tougher for me because I’m on dialysis. But God is good, and I’m here.”

About a dozen feet away, also sitting in a designated area to rest for a mandatory 15 minutes after the vaccine was administered, was Toni Gasaway of Detroit. She, too, was leery about getting vaccinated, in part because “it’s not what we know, it’s what we don’t know’’ about it, she said.

Gill and Gasaway weren’t alone in their concerns. According to data released by the state, Black Michiganders are about twice as likely to not have their two doses of the COVID-19 vaccine than those who are white.

“I knew I would come today, but I was worried about it, like I’m part of some experiment,” Gasaway said. “But we have to do what we can to help stop this and get back to normal life, so I’m willing to give it a try. I feel badly for everyone who has lost a family member; it (the coronavirus) just swooped in. It has affected everybody.”

Asked to describe his experience at the Ford field house, Gill said: “It now feels like a blessing.’’

And the blessing came with a soundtrack, as Highland Park City Councilperson Sheila Jackson treated patients to serenades on her flute. It was important to organizers that vaccine clinic experience run as smoothly and efficiently as possible in a concerted effort to make vaccine dissemination transparent, collaborative, and well-communicated for the vulnerable groups served by “Detroit Beats COVID-19!”

And for once skeptical Highland Park residents, those who are now fully vaccinated through this pop-up clinic know it was the right thing to do — for themselves and their community.

The latest information regarding vaccine availability for Wayne County residents can be found here.

Gratitude at (and for) Wellness Wednesdays Friendsgiving

Making Space to Fall in Love with Your Health

Coping with Grief Together at Wellness Wednesdays