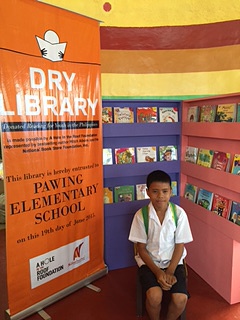 A children’s library opened Friday in the central Philippines. But it symbolizes so much more than that.

In November 2013, a super typhoon flattened areas of the country, killing more than 6,000 people and displacing thousands more. When author Mitch Albom visited the island nation three months later, touring schools where he saw tents and plywood serving as makeshift walls, he pledged to build 10 libraries in one of the hardest hit regions ravaged by the storm and stock them with books.

A drive was launched that day: “Donated Reading for Youth of the Philippines’’ – also known as DRY Libraries.

On Friday morning, in a ceremony that included schoolchildren, top Filipino educators and representatives from the National Book Store Foundation – Albom’s Philippine partner in the project – the first of 10 libraries was officially christened at Pawing Elementary School in Palo, Leyte.

It is the first library ever at the school.

“I’m so happy that the dream that we had of helping the people of Tacloban has finally come to fruition,” Albom said. “We came up to the idea of DRY Libraries in the aftermath of the horrible destruction of Yolanda when it was difficult dream about anything. The area was so destroyed that it was almost impossible to dream of a new building going up. And yet when I look at these pictures and I see the murals – and I see the love and care in which the buildings were designed in — it just proves that hope that never dies and people coming together can overcome any obstacle.”

The new library at Pawing is state of the art – the first monolithic dome library in the country – and built to withstand a strong storm. From a distance, the dual dome structure appears to rise from the earth like a pair of matching full moons.

The inside of the library is decorated with phrases from Albom’s books and colorful murals. One panel boasts: “Read More. Know More. Achieve More.”

Albom helped coordinate the DRY Libraries program through his A Hole in the Roof Foundation, which is involved in rebuilding for the homeless after disasters and has been operating an orphanage in Haiti since the 2010 devastating earthquake.

Albom launched the Filipino drive with an initial $10,000 donation and a pledge to help raise $160,000 needed for construction. He also donated hundreds of copies of his books, and has received support from dozens of other popular writers including Stephen King, John Green and JK Rowing.

The NBS Foundation has promised to match funds raised by Albom on a dollar-for-dollar basis until the goal is met. Fundraising efforts will continue until all 10 libraries are built, Albom said this week. The target date for completion is March 2016.

“This is step one of 10 steps that we’re going to take with these libraries and I can’t wait stocking the shelves with books from my friends in the literary community and Filipino authors as well,” Albom said. “And I will keep my promise of being in the Philippines for the opening of the 10th library when we reach our goal, which I know we’re going to do.”

Since the groundbreaking at Pawing last November, Albom was kept updated on the construction progress through photos and videos sent by NBS Foundation.

“The murals have been so impressive,” he said. “I’ve gotten emailed pictures of those and I’m very honored and humbled and flattered that (the foundation) would choose to use words from some of my books to be on the walls.

“But what I’m most proud of is should Mother Nature decide to rear her head at a future date, the design of these monolithic domes is built to withstand that, and we don’t ever have to worry about losing the chance of kids being able to read just because of a storm.

“I wish I could be there in person, but I feel like I am in seeing all these photos and video. And I can’t wait to return to the Philippines and visit these libraries myself.”

A Hole in the Roof to Help Sacramento Church