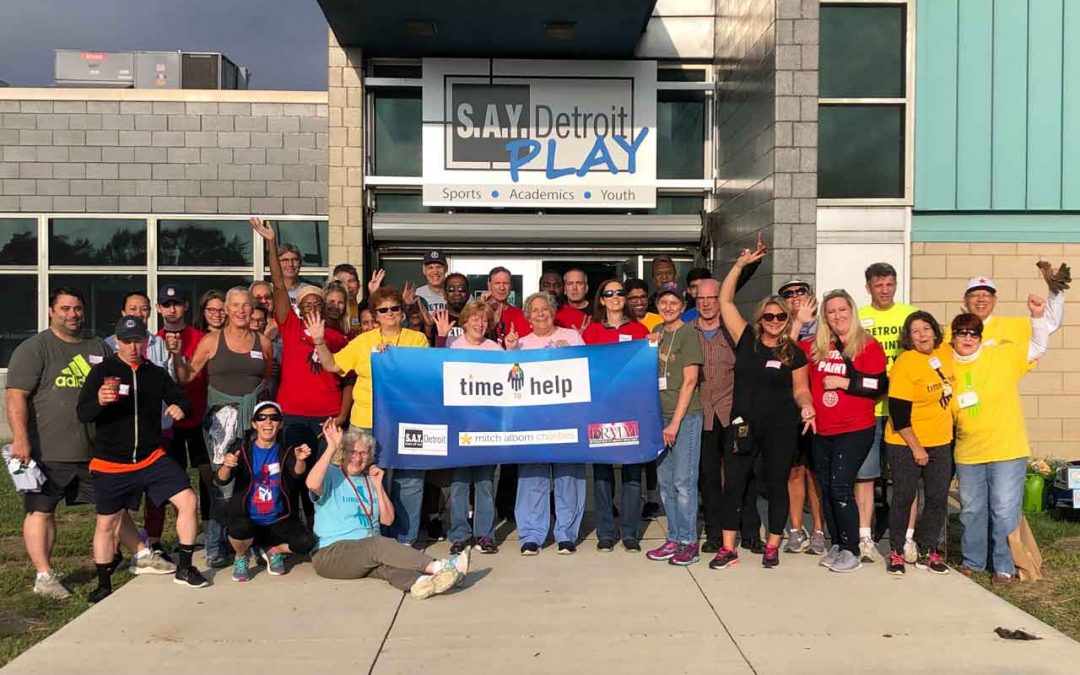 DETROIT — The SAY Play Center at Lipke Park was a whirlwind of activity on a gorgeously sunny, fall-like day Saturday (Sept. 7) in northeast Detroit.

As the SAY Play Warriors youth football teams played a series of age-group games on Matthew Stafford Field — with the aroma of grilled hotdogs and hamburgers wafting in the air — nearly 50 volunteers from A Time to Help were nearby making their own mark.

For four hours, beginning at 8:30 am, ATTH volunteers — captained by members of our SAY Detroit Muscle Crew — came together to beautify the landscaping at front of SAY Play as well as tackle a large painting project inside the building.

With the start of fall semester just over a week away for inner-city youth (ages 8-18) at the free academic enrichment center, volunteers painted areas in need of immediate sprucing up, including the cafe and kitchen, lobby, two offices, a conference room and several doors.

SAY Detroit is grateful to two local businesses that partnered with ATTH on the project and donated materials and supplies: Motor City Paint (a division of O’Leary Paint) and English Gardens.

“We were so happy to be able to donate paint to SAY Detroit,” said Motor City Paint sales rep Karen Gilbert, who also volunteered on Saturday. “It’s such a great organization to be able to have that literacy factor (at SAY Play) in bringing kids in after school and allowing them to have someplace safe to play and learn. We were really excited to be able to honor that by bringing in some paint and freshening up certain areas.’’

The largest volunteer contingent joining ATTH for the day came via longtime SAY Detroit supporter Kevin Ramsby, pastor of Arise Church on Eight Mile Road. Ramsby’s 14-member team tackled the cafeteria and kitchen under the leadership of Tom Monte, a professional painter and one of three members of the SAY Detroit Muscle Crew who helped oversee the project.

“I’m here to back the mission of bringing opportunity to the kids in the city, and I love working with the volunteers and the crew,’’ Monte said. “We had a riot today, just a really good crew.”

Mark Dettling, a general contractor and carpenter, and Tabitha Mendez, an advertising professional and skilled DIY-er, were the other Muscle Crew volunteers who guided teams Saturday morning. The Muscle Crew is a group of tradespeople who volunteer to assist SAY Detroit with physical projects.

ATTH’s next project is Oct. 12 at Motown Soup. Registration for that event will open at the end of the week at atimetohelp.org.