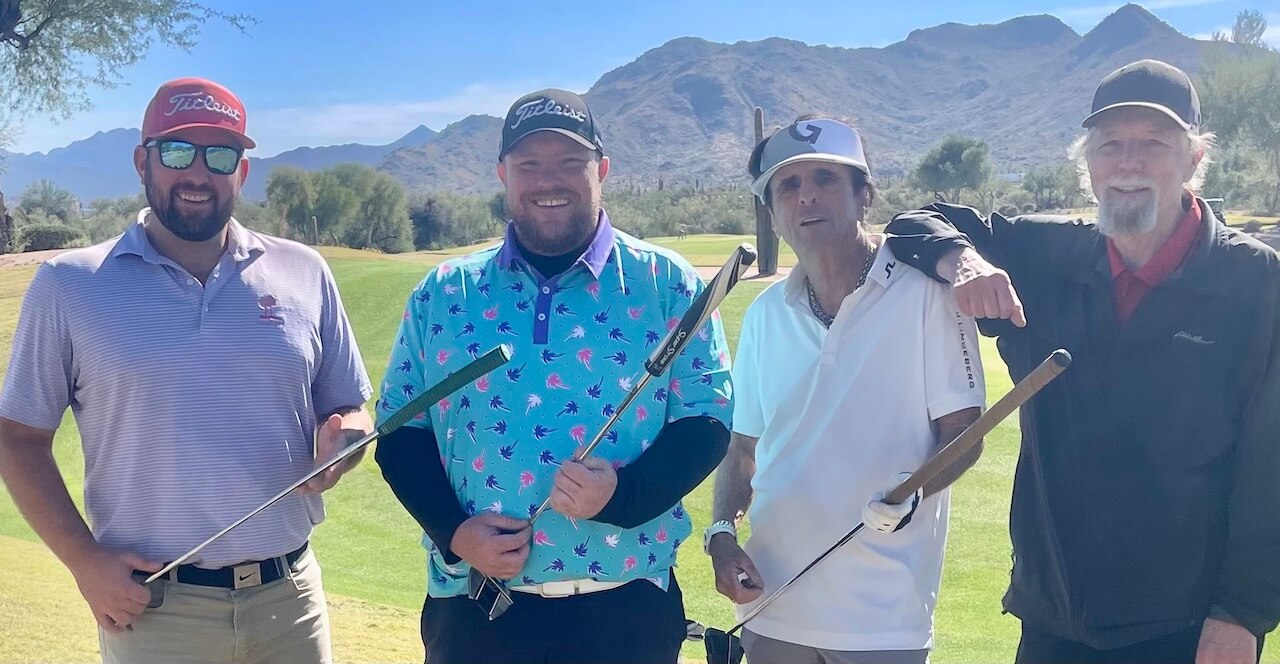 You’ve heard a lot about giving this week, and why it’s so important to the many charities that depend on your generosity to help those who need it most. But what if giving could be … fun?

It is for Mike Loehndorf. A longtime supporter of SAY Detroit, he won an auction during the 2021 Radiothon to play golf with musician Alice Cooper, as well as a signed jacket and guitar.

Formerly of Michigan but now retired in Indiana to be close to his grandchildren, Mike, 70, doesn’t even golf!

But his son, Scott, does. The special trip to Arizona to spend a morning hitting the links at the We-Ko-Pa Golf Club was a chance to build a lasting memory with his son, who is as big a fan of the sport as he is of Alice.

And memorable it was.

After an early morning tee time was delayed due to frost, Mike and Scott, along with Scott’s friend, were able to spend more than an hour just sitting and talking with the Rock and Roll legend. What’s said on the course…stays on the course, but there were tour stories and highlights from a life on the road.

But we can tell you that Alice has been golfing for the last 30 years, crediting his “golf addiction” with helping to cure his other addictions and transform his lifestyle. Feeling healthier now in his 70s than he was in his 30s, he is planning to tour again next year.

After 6 hours and 18 holes — and a surprise encounter with PGA champ John Daly — Mike and Scott followed Alice to a nearby Guitar Center, where Alice let Mike pick out a guitar of his choice, which he also signed.  Alice was a “wonderful, personable host” according to Mike, and they’ll be telling stories about this special day for years.

When we asked Mike why he supports the Radiothon — he watches the live stream and you can, too, on December 8th — it’s because of the incredible experiences he’s been able to participate in by supporting what he believes is a good cause.

You read it right — experiences. In 2014, he won an auction for brunch with Jane Pauley and to attend a CBS Sunday Morning taping in NYC. As with the golf outing, his generosity was paid forward, this time to his sister-in-law Brenda and her daughter. Brenda and Mike’s late wife Frankie attended high school with Jane. They all had “a blast” at this unexpected reunion.

The autographed guitar will soon hang on the wall in his den, next to another signed by singer-songwriter Michael Martin Murphy. The leather jacket — Alice said it makes Mike look 10 years younger — is now a treasured possession. And a day at the golf course is an experience a father and son will never forget.

SAY Detroit was able to add Mike’s donation to the record-breaking $1.65 million total raised that day, which went on to support a year of learning, healthcare, and housing opportunities for our neighbors in need in Detroit.

We hope you’ll join us for another day of fun — and giving.

Are you ready to give and have a good time? The bidding starts at 6AM!

Your gift today will be recognized in the official radiothon tote board!