S.A.Y. Play Center Gets Spruced Up

When the S.A.Y. Detroit Play Center at Lipke Park reopens after the Fourth of July, the students enrolled for the summer session will enjoy a fresh start — in more ways than one.

Nearly 40 A Time to Help volunteers spent last Saturday morning (June 24) giving the inside of the facility a scrub-down, while another group tackled the center’s vast campus, including weeding and picking up trash along the fence lines.

It was ATTH’s first visit to S.A.Y. Play in two years, when a team of volunteers worked to prepare the center for its Grand Opening in the fall of 2015.

From cleaning windows and wiping kitchen cupboards, to dusting off book shelves in the academic center (called The D.E.E.P.), just about every nook and cranny of the facility was freshened-up after the recently-completed 2016-17 academic year.

Ken Brown, Mitch Albom’s radio show co-host, led the project in Albom’s absence. But Albom, who founded ATTH in 1997, still kicked off the morning by calling in from California (shortly after 6 a.m. Pacific Time!) and welcoming the team via speakerphone.

The volunteers included three visitors from Albom’s Have Faith Haiti Mission in Port-au-Prince. Although they arrived shortly after the project was underway, the young men — Siem, Manno and Moise — were eager to make up for lost time, pulling on new ATTH T-shirts over their own shirts and practically racing to join a group cleaning the restrooms.

A highlight for ATTH regulars was an appearance by Jean Yee, long-time S.A.Y. Detroit supporter and volunteer. Yee, former coordinator of ATTH, directed a group of volunteers who were cleaning the D.E.E.P, where Yee has volunteered as a reading mentor since last January.

Asked about her passion for volunteering, Yee said: “You get way more out of it than you put in. I remember I started the year after my mother passed away in 1997, and I registered (for ATTH) not knowing what I was getting into it. Volunteering gives you an appreciation; someday it might be you who needs help. I know it’s true, giving is living.” 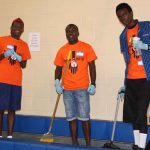 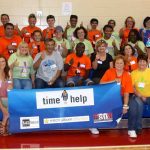 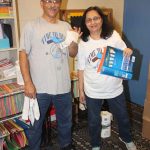 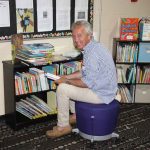 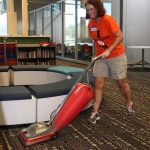 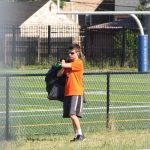 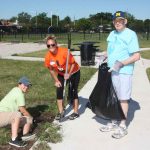 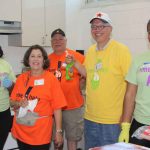 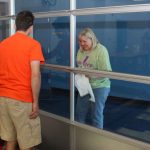 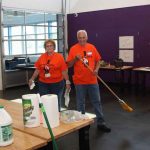