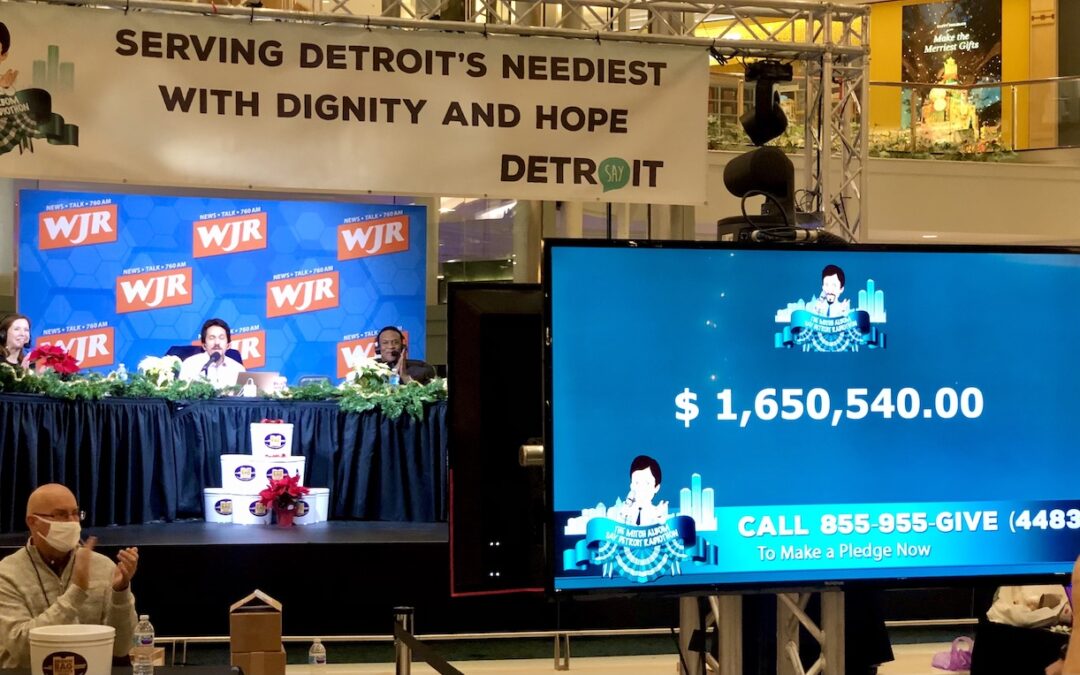 Fifteen hours can seem like a long time when you start at 6:00 AM, but it’s not enough time to properly recount the true generosity on display during the 10th Annual SAY Detroit Radiothon.

Held Thursday, December 9th from the Somerset Collection’s North Grand Court,  broadcast on WJR 760 AM, and live streamed at mitchalbomradiothon.com,  the event raised the highest one-day total for SAY Detroit ever at $1,650,540.00, bringing the ten-year total to more than $10 million.

If you weren’t able to tune in last week, or couldn’t stay for long, please enjoy some highlights from the day below: musical performances by Sawyer Fredericks and Evrod Cassimy; an impromptu preview performance from Hugh Jackman in The Music Man; our young philanthropists from SAY Play who are soon to be young entrepreneurs; and the recipients of this year’s Working Homes / Working Families giveaways.

As a guest shared in a testimonial, the work of SAY Detroit lifts up the entire community by tackling issues that are connected and affect each other: inferior access to housing, health, education, and economic opportunity can ripple through generations. But the ripple effects can be powered for good. As Detroit Mayor Mike Duggan noted, the SAY Play at Lipke Park has help regenerate its surrounding neighborhoods. Where Working Homes / Working Families has been pairing refurbished houses with families without a decent place to live and turning empty lots into community parks, as with Morningside, property values are  growing, signifying neighborhood revitalization there, too.

The day included an announcement of a $1 million grant from the A.A. Van Elslander Foundation to help build The Kelly and Matthew Stafford & Friends Educational Center, an annex building to SAY Play and the debut of Mi-Cycle.

SAY Play was once again in the limelight as Detroit Pistons owner Tom Gores called in put a cap to the day with another surprise announcement, which is now becoming a welcome and beloved tradition. In addition to a gift of $250,000 to benefit the SAY Detroit Play Center, $100,000 was pledged for a special project for the students to build a business idea and promote entrepreneurship.

We can’t wait to see the ripple effects of these empowering opportunities for generations to come.