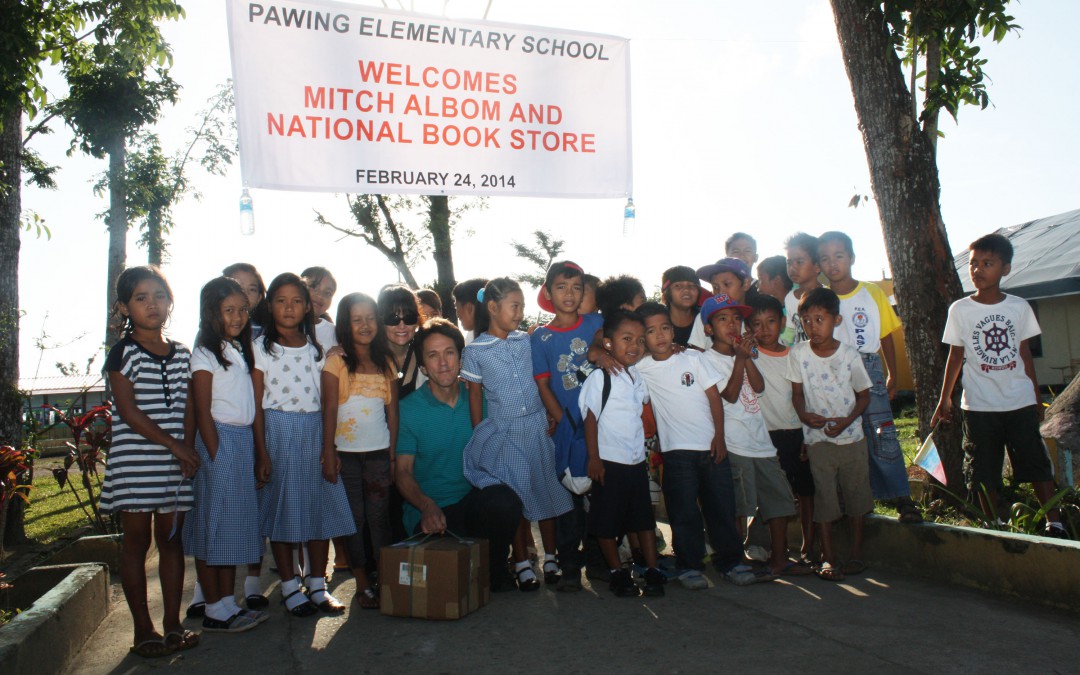 “I am blessed to have many Filipino readers, including many students, and I wanted to do something to help,” Albom said, during a visit to the Pawing Elementary School, one of scores of schools reduced to makeshift classes after the typhoon devastated their infrastructure.

Albom revealed he was establishing the Donated Reading for Youth of the Philippines (D.R.Y. LIBRARIES) to reconstruct 10 school libraries destroyed by Yolanda and stock them with books.

Albom pledged to help raise $160,000 needed for construction, partnering with The National Book Store Foundation here in the Philippines to get it done quickly. He said he would start with a $10,000 donation of his own. The NBS Foundation has said it will match funds raised by Albom on a dollar for dollar basis until the goal is met.

In addition Albom pledged hundreds of copies of his own books to start filling the shelves, and then made a surprise announcement.

“Since I’ve been here, I’ve been emailing writers I know back home – and some I don’t know – to ask if they would help, seeing as many of them are popular here, particularly with high school students.”

“They were all quick to say yes. I think we as authors always appreciate the effort people make to read and cherish their books,” Albom said. “That is so true of readers here in the Philippines, I’ve seen my own books pulled from the flood damaged homes, moldy, discolored, yet brought to me to sign. It’s incredible and heartwarming.”

Albom has been visiting the Philippines since early last week. He purchased and donated 40 yellow fishing boats to help affected fisherman in the region. He then dropped in on classrooms in Tacloban and the Leyte district Monday, and gave books to the children and teachers. He also visited the mass graves in San Joaquin where hundreds of bodies are buried, including many children. One such grave is in the shadow of one of the sites where DRY plans to build a new library.

Albom will coordinate the DRY program through his A Hole In The Roof Foundation, a 501c3 charity which is involved in rebuilding for the homeless after disasters, and has been operating an orphanage in Haiti since 2010, after the devastating earthquake. Albom and NBS Foundation said their goal is to begin construction on the first three libraries by late spring.

The mission of A Hole in the Roof Foundation is to help faith and relief groups of every denomination who care for the homeless and/or victims of disasters.