The Repair of Pilgrim Church 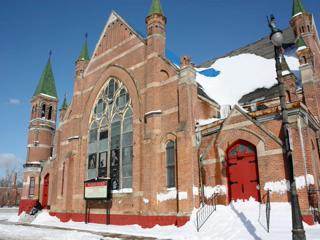 I only wish all of you could have been in the church with the hole in the roof on Wednesday. Because the hole is no more. The story I chronicled in my book “Have A Little Faith” has reached around the world, and you have reached back. Thanks to more than $80,000 raised through the Shingle Bells campaign, much of it a dollar at a time, a new roof now sits on that church, and a new ceiling has replaced the one in through which you could look up and see the sky. There will be no more plastic tent built to pray inside of during cold weather. No more ducking falling plaster.

The ceremony was attended by congregants, by homeless clients who sleep on the church floor, by the mayor of Detroit, by the singer Anita Baker, by volunteers from the suburbs, even by a pastor from California whose church donated a great deal of money to buy the building supplies without ever having seen Detroit in person – until Wednesday.

There were prayers of thanks and songs of joy. At the end, I climbed a huge ladder to the ceiling, some 50 feet above the congregation, and pulled off a wrapping to reveal a giant plaque in the exact spot where the hole used to be. That plaque contains the hundreds of names of donors form around the world who fixed this church and made it whole. Their names will now be what you see when you look up from the pews, instead of rotted plaster and dripping rain and snow. It is now and forever a symbol of what we can do when we pull together.

The spirit of the book “Have A Little Faith” is that faith can be what connects us instead of what divides us. Inside that church Wednesday were people of different faiths and different denominations, but all pulling for one another as children of God and the family of Man.

When the Pastor began trading verses with Anita Baker in an impromptu gospel explosion of song, and everyone clapped along, it was pure joy, pure gratitude and pure goodness. You don’t get to see goodness so easily anymore, not like that. I have to thank all of you who helped, either with money or just good wishes. I remain stunned at what the power of a story in a book can do, and how deeply the human heart can feel for strangers – who are strangers no more.