We Mourn the Loss of Pastor Henry Covington 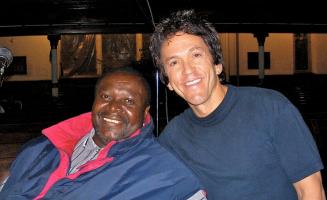 It is with great sadness that we inform you that Pastor Henry Covington, 53, passed away this morning. Henry was pastor of Pilgrim Church/I Am My Brothers Keeper Ministries, a church that was featured in Mitch’s book, Have a Little Faith.

Through his ministry, Henry cared for Detroit’s poorest, and offered shelter to the homeless in the church’s basement. He did this with no money, with a gaping hole in the church’s roof, without knowing where he would find the resources to keep providing.

Mitch met Henry through S.A.Y. Detroit, a Detroit-based charity Mitch founded that was going to help provide a tarp to cover the hole in the church’s roof. From a wary introduction grew a tender friendship. Together, and with donations raised through the Shinglebells campaign last year, the roof was repaired. Now in its place is a plaque with the names of all who donated.

Henry was a dear friend, an inspiring pastor, and a very kind soul. He took care of those who were ignored by others. He opened his home and his church to those who needed him most. And he gave thanks each day for the opportunity to do so.

We will miss him.

He is survived by his wife, Annette, and their four children.

Last photo of Henry, so happy in NYC Monday. We had a great day. Can’t believe he’s gone. Please don’t forget his church.

Henry, Janine and me at Rock Cent in NYC. His spirit will never die A big man in every way.

At a banquet celebrating the launch of Have A Little Faith, Henry wrote and performed this song, “What About the Children?”

The mission of A Hole in the Roof Foundation is to help faith and relief groups of every denomination who care for the homeless and/or victims of disasters.